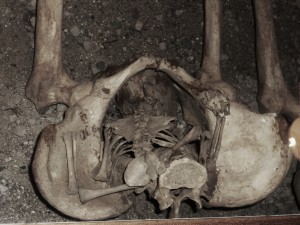 Coffin birth is as sad, and eerie, as it sounds:  Known as Postmortem Extrusion, it’s the expulsion of a non-viable fetus through the vaginal opening of a decomposing female.  Essentially it’s the result of the build-up of gas, which applies pressure to the uterus, causing it to be expelled, and sometimes turned inside out.  The gas is produced by bacteria in the organs and abdominal cavity, during the process known as putrefaction.

These days it is rare to encounter a coffin birth, as the embalming process involves pumping chemical preservatives and disinfectants into the body, typically interrupting the likelihood of coffin birth.  There have been cases from other points of history, however, including reports from medical authorities ranging back to the 16th century, as well as archeology cases throughout history demonstrating it happened at other times, and in other cultures, as well.    Below you will see a photograph of one such case.

As recently as 1904, an obstetric textbook included the term, though it was dropped from later editions in 1966, and 2009.

So, while uncommon, this phenomena does exist, though it’s often interrupted today due to chemical intervention.   Nonetheless, encountering the idea of coffin birth serves well to bring to mind how precious and valuable each moment is, and how none of us – even when life is filled with hope for a bright and growing future – know how our days are numbered, and what remains.  By all means, let this be a reminder to live joyfully, to suck the marrow out of life, and to hug your loved ones tight and tell them how much they mean to you, for today is a gift, and tomorrow not a promise, but a dream … that will hopefully spin into a reality.

Until I see you again,

Create an amazing day for yourself!